Helping out a trade customer 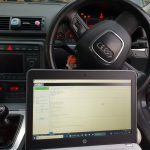 We visited a trade customer this week to help out one of there customers.

After the customer purchased an Audi A4 of her dreams it soon turned in to a nightmare. The car had previously been remapped and the DPF gutted so wanting to be road legal they purchased a new genuine Audi DPF and had it fitted.

After arranging for the original company to re-remap the car to add the DPF back in to the file she thought her problems where over.

Weeks later the car broke down due to a blocked DPF and after having weeks trying to keep it clean, manual regens, chemical cleans the car finally refused to start.

We then visited and after checking the tuned map on the ECU found the DPF cycle was still missing from the ecu and most likely the EGR cycle aswell. So a incorrectly mapped ECU was the route cause of the issue and [...]